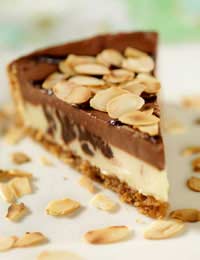 Cheesecakes are great dishes to serve to friends and at dinner parties as they usually look very impressive, despite being easy to make. Whether you prefer them oven baked or fridge chilled, there are some super sugar free recipes that work beautifully.

Cheesecake recipes can also be varied easily with seasonal fruit substitutions, as well as alternative uses of chocolate, vanilla and lemon. They also keep perfectly in the fridge for several days and often taste better a day or two after being prepared.

This fruity cheesecake is quick to whip up and makes a perfect summer dessert. Instead of strawberries, you could try raspberries, blueberries or even banana.

Melt your butter and honey for the base in a small pan over a low heat.

Crush your biscuits and place with cinnamon in a large bowl. Mix in melted ingredients.

Grease an 18cm (seven ins) flan plate or tin. Press your base mixture in using the back of a metal spoon. Place in the fridge to chill.

Soak your gelatin leaves in a little warm water. Bring your milk to the boil then place the soaked gelatin and sugar free jam in. Stir until dissolved. Pour your warm liquid into a bowl. Add your cream cheese, crème fraiche and fruit. Whiz together with a hand blender. Beat your egg white until stiff then fold in.

Pour on top of your base and place in the fridge to set. Serve with whipped cream.

This is a rich, sugar free cheesecake that will definitely appeal to chocoholics. It has to be baked in the oven but should become beautifully firm if cooked properly.

Melt your butter and honey in a small pan over a low heat. Place your flour and cinnamon in a large bowl. Add the melted ingredients.

Grease an 18cm (seven ins) cake tin. Press your base mixture in using the back of a metal spoon. Bake quickly for 10 minutes.

Place your milk, cocoa and jam in another small pan and melt over a low heat. Place your cream cheese, eggs and double cream in a large bowl and whiz with a hand blender. Pour in your melted chocolatey mixture – and blend again. At the last minute, sieve your cornflour and whiz in.

Pour your liquid on to the cheesecake base and place in the middle of the oven. Cook for about 40 to 50 minutes until firm when pressed on top. It may still feel a little wobbly underneath but as long as it’s not runny, this is fine. Remove from the heat.

Leave to cool, then take from tin. Whip your cream and cover the top. Sprinkle on a little cocoa. Chill again in the fridge. Then slice and enjoy!

No Sugar Rice Puddings and Semolinas

Old Fashioned Puddings Made Without Sugar